Originally designed in collaboration with Pan Am Airlines, Rolex introduced the first GMT-Master watch for pilots to simultaneously track two time zones. By the 1980s, the collection had evolved into the GMT-Master II and gained the ability to track a third time zone. 2020 update: suggested retail prices start at $9,700 and increase depending on the metal used. Click here to view our entire selection of pre-owned Rolex watches for sale.

This Page Contains Information About:

About The Rolex GMT Master II

History of the Rolex GMT-Master II

A simple and elegant solution to simultaneously tracking multiple time zones, the original Rolex GMT-Master added a fourth arrow-tipped 24-hour and and a rotating bezel, enabling pilots to reference a secondary time zone without disturbing reference time by simply turning the bidirectional rotatable bezel. Several variations were produced during this era as Rolex worked to refine and improve upon their original design.

While virtually all aspects of the watch changed or evolved at some point or another - from the case size, to the bezel material, to the style of dial - the core functionality of these GMT watches remained unchanged. On these references, the 12-hour hand is linked to the 24-hour hand, meaning that with the watch is capable of displaying a maximum of two time zones. That all changed when Rolex released the GMT-Master II in 1983.

Rolex had already updated their GMT pilots watch several times by the 1980s; however, in 1983, they introduced a mechanically enhanced version of the original GMT-Master model, where the 24-hour hand could now be set independently from the 12-hour hand. Named the GMT-Master 2, the additional functionality enabled wearers of Rolex GMT-Master II watches to set two different time zones with just the hands, while leaving the rotating bezel in its neutral position, and then turn the bezel to read a third time zone.

Retaining many of the same design elements as the original, the first Rolex GMT-Master II was the reference 16760, which was then replaced by the GMT-Master II 16710 in 1989, which features a slightly slimmer case and a new movement. In 2005, Rolex announced a revamped GMT-Master II collection with 1167xx reference numbers that feature a significantly redesigned case and Cerachrom bezels. Finally in 2018, Rolex launched the most recent GMT-Master II models with 1267xx reference numbers, complete with new-generation movements, material options, bracelets, and bezel colors.

Although the very first Rolex GMT-Master was developed as an airline pilot watch for professional use, a much wider audience has since adopted it over the last six decades, thanks to its striking design and highly practical functionality. Originally designed for professional pilots, but now enjoyed by a remarkably wide variety of world travelers and fans of versatile luxury watches, the Rolex GMT-Master II has become one of Rolex's most iconic sport watch models. 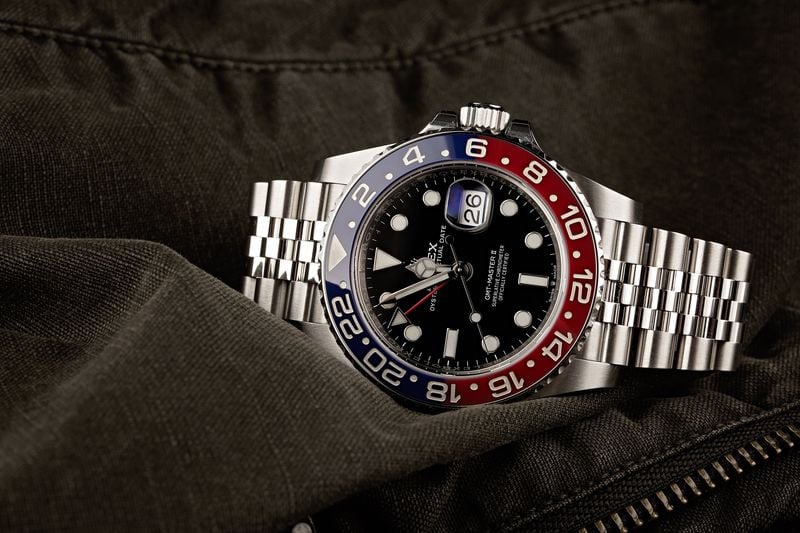 How Much Is A Rolex GMT-Master II?

As is the case with many Rolex sports watches, the average Rolex GMT-Master II price has significantly increased on the secondary market in recent years due to surging demand. This is particularly true of the stainless steel GMT-Maser II models, which are some of the most sought after timepieces in the world right now. The Rolex GMT-Master II 2019 editions are currently sold out at every single boutique worldwide, with waitlists stretching several years in length. Many retailers have even stopped taking down additional names for Rolex GMT-Master II waitlists simply due to how unlikely it is that supply will ever catch up.

Depending on the specific model and its overall condition, examples of the stainless Rolex GMT-Master II for sale on the secondary market can range anywhere from $10,000 to $22,000 and precious metal versions can reach up to $35,000, with the ultra-luxurious gem-set editions selling for anywhere between two and four times more than that. Additionally, rare and collectable vintage references routinely sell for tens of thousands of dollars, and well-preserved examples of the very first reference can fetch over a quarter of a million dollars when they surface at auction.

What Is The Price Of A Rolex GMT-Master II?

The Rolex GMT-Master collection has existed since 1955; however the GMT-Master II did not make its first appearance until 1983, when Rolex added an independently adjustable hour hand, and thus the ability to simultaneously display a third time zone. While the Rolex GMT-Master II was offered alongside the standard GMT-Master until the end of the 1990s, it has now replaced it completely, and the only GMT watches that Rolex sells today are GMT-Master II references. 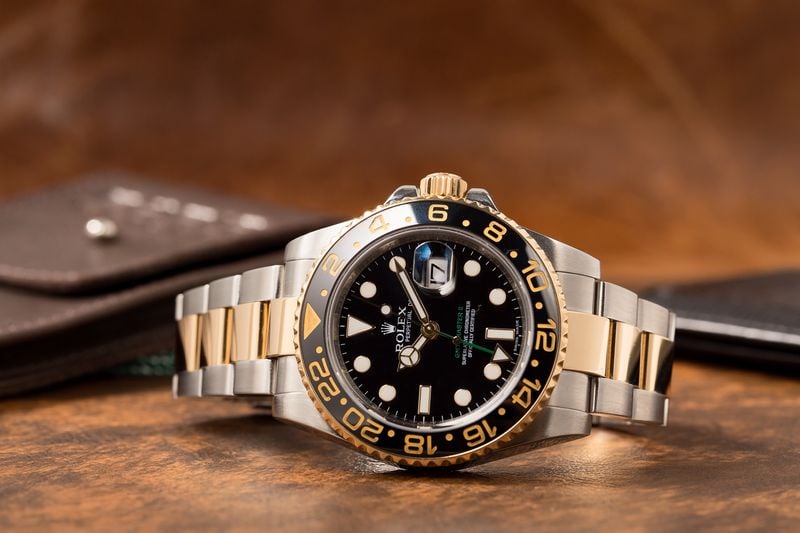 Below is a list of all the different Rolex GMT-Master II references that have been produced throughout history. Additionally, it is also worth noting that the majority of these references have only existed since 2007, when Rolex completely redesigned the watch and started expanding their GMT-Master II collection.

While the Rolex GMT-Master has been an absolute legend in the watch world since the mid 1950s, the GMT-Master II has only existed since 1983, when Rolex redesigned their iconic pilot's watch to offer additional capabilities.

Without a doubt, the bidirectional rotating 24-hour marked bezel of the GMT-Master II is the most recognizable design trait of this iconic Rolex Professional watch collection. Many GMT-Master II bezels feature a split-color design - a feature that is not just for aesthetics, but also to serve as a rough approximation of daylight and nighttime hours on the 24-hour scale. The very first GMT-Master came equipped with a blue and red "Pepsi" bezel, where the red portion represented the daylight hours while the blue contains the hours during which it would be dark.

Along with the colors, the material used for the GMT-Master II bezel inserts has also evolved over the decades. By the time the GMT-Master II first appeared in 1983, Rolex was no longer using the Bakelite plastic that they were on the original reference 6542, so when the ref. 16760 made its debut as the very first Rolex GMT-Master II, it was fitted with a black and red bezel insert made from anodized aluminum. Rolex continued to use aluminum for their bezels until 2005, when the company turned to high-tech Cerachrom - a proprietary ceramic alloy that is virtually impossible to scratch and highly resistant to fading, offering unparalleled robustness and longevity.

When the first ceramic bezel was unveiled on the GMT-Master II, Rolex claimed that it would be impossible to create a bi-colored bezel in Cerachrom, and only offered their new ceramic GMT-Master II with an all black Cerachrom insert. However, thanks to Rolex innovation and technology, two color Cerachrom editions eventually joined the collection in the form of the GMT-Master II Pepsi, the GMT-Master II Batman, and the GMT-Master II Root Beer. The two-color combination on a single piece ceramic component was a world first, and restored the classic bi-color bezel aesthetic of the Rolex GMT-Master II.

The dial layout of the GMT-Master II is very similar to other Rolex professional watch models, and has remained largely unchanged since its initial introduction in the mid 1950s. It features a mix of circular, triangular, and rectangular hour markers with Mercedes-style hands and an arrow-tipped 24-hour hand, all coated with luminescence for maximum legibility in low light conditions. Additionally, all GMT-Master II dials also include a date window at the 3 o'clock location, accompanied by a Cyclops lens affixed to the surface of crystal to magnify the date display.

Although most GMT-Master II dials are black, Rolex has made a few other special dial designs such as the champagne and silver "Serti" dials set with diamonds and ruby hour markers, full diamond pavé dials, blue dials, bright green anniversary-edition dials, and even dials made from slices of an ancient meteorite. However, it should be noted that the majority of these more exotic dial options are only available on precious metal versions of the GMT-Master II; virtually all stainless steel Rolex GMT-Master II watches are fitted with standard black dials.

While certain Rolex watch collections like the Submariner and Explorer have only ever been fitted on the standard Oyster bracelet, Both the three-link Oyster bracelet and the five-link Jubilee bracelet have been available on the GMT-Master II collection (at one point or another) over the years. Additionally, depending on the specific GMT-Master II model, there are stainless steel, two-tone, and solid gold variations of both styles of bracelets.

As of 2019, Rolex has streamlined the bracelet options for the GMT-Master II collection. Currently, the Oystersteel versions are exclusively fitted with Jubilee bracelets, while the 18k white gold, 18k Everose gold, and two-tone Everose Rolesor versions are only offered with matching Oyster bracelets.

There have been several automatic mechanical movements that have powered the Rolex GMT-Master II throughout its history. While all GMT-Master II watches will offer the same functionality as far as having a date display and an independently adjustable hour hand, there are a few differences that exist between the following list of GMT-Master II calibers.

The latest Rolex GMT-Master II movement is the Caliber 3285, which was introduced in 2018 as an all new generation of Rolex multi-time zone movements. Protected by 10 patents, the Rolex Caliber 3285 not only offers enhanced precision, reliability, and shock resistance but also boasts an increased power reserve of 70 hours, compared to the 48-hour power reserve offered by the previous generation. 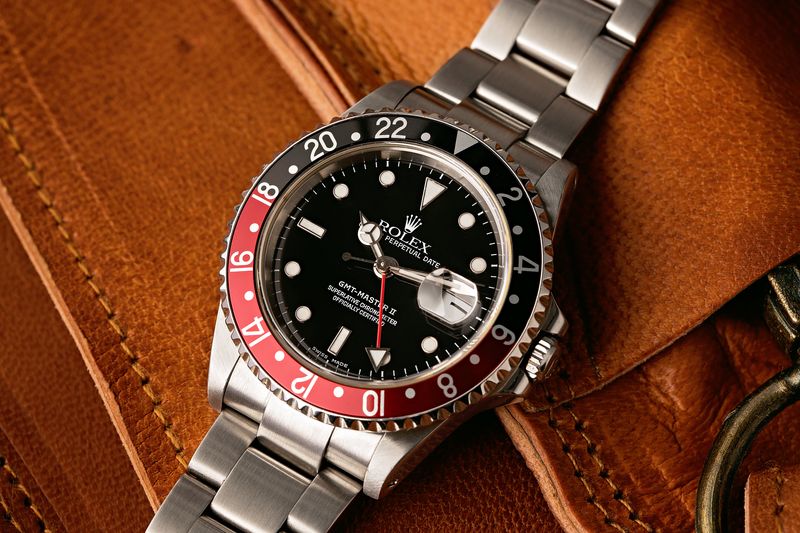 Given that the original collection from the 1950s was initially intended to be the ultimate multi time zone cosmopolitan watch for professional pilots and jet-setters, it makes perfect sense why the modern Rolex GMT-Master II has found such a strong following among many of today's most famous athletes, celebrities, and businessmen. The list of noteworthy names that own GMT-Master II watches is almost endless, but it includes the following names:

The ref. 16710 will always be trending due to its versatile feature set and classic proportions. It remained in production for nearly two decades, making it relatively easy to find on the pre-owned market. It wasn't until 2007 when the ref. 116710 was released that Rolex finally stopped production on the ref. 16710. Produced under the immensely successful 6-digit reference in steel were the all-black ref. 116710LN and Batman ref. 116710BLNR.

More recently, Rolex released the 1267xx series, including a brand-new Batman GMT-Master II 126710BLNR on a Jubilee bracelet and also the first instance of a ceramic Pepsi bezel on a stainless-steel Rolex (ref. 126710BLRO). The current generation also features a brand-new Cal. 3285 movement with a Chronergy escapement, and is a grail watch of many. With waitlists spanning years, the best option for many is to turn to the secondary market. 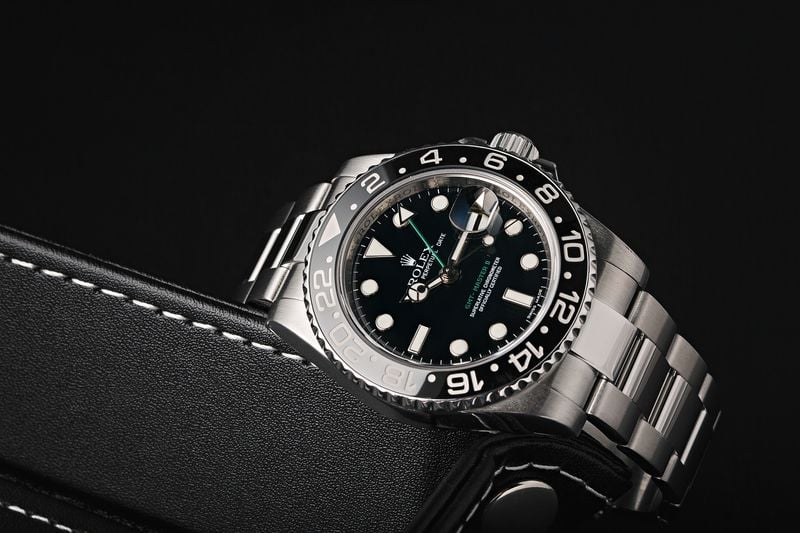 How Can I Tell If My GMT-Master II Is Real?

Is The Rolex GMT-Master II A Good Investment?

What Is GMT-Master II On Rolex?

How to Set The Date on A Rolex GMT-Master II

Copyright Bob's Watches. All rights reserved. Bob's Watches is not affiliated with Rolex S.A., Rolex USA, or any of its subsidiaries.

Bob's Watches is an independent watch dealer and is not sponsored by, associated with and/or affiliated with Rolex S.A., Rolex USA, or any other brand listed on its website. Bob's Watches only sells pre-owned watches and provides its own warranties on the watches it sells. The brand names and associated model names for Rolex, OMEGA and other manufacturers are the trademarks of their respective owners.